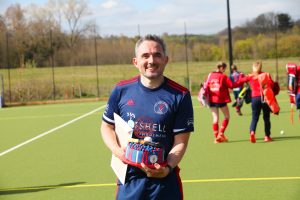 Founder and Director of The Hockey Academy

Greatest Achievements:
Winning (as Head Coach) the National U15 Club Championships with Wycombe HC in May 2008

Winning and gaining promotion to the National Premier League (as Head Coach & Player) with Sevenoaks HC in April 2017. Selected in the East Conference Team of the Season 2017.

Being the Director of Coaching at HC Knole Park